September 2, 2012 - Always with us: The Sandmännchen (the fairytale Sandman) 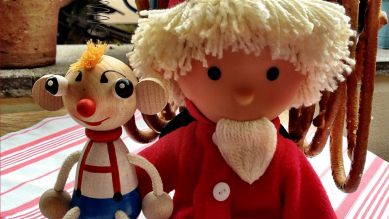 Whether it’s Budapest, Belgrad or Plovdiv in Bulgaria; Our mascot, the Sandmännchen from rbb, is always with us. In Prague, he immediately became friends with Hurvinek from the famous Czech puppet-duo Spejbl and Hurvinek from the puppeteer Josef Skupa.

What an ordeal reaching Plovdiv, we had to wait forever at the Bulgarian border. At 10.28 p.m. local time we finally reached our destination dead-tired. After having had small problems in communicating and spending 2,5 hours at the Bulgarian-Turkish border on Wednesday, we could finally say: Istanbul, we are on our way!

We finally arrived in Istanbul on Wednesday shortly before Midnight. The clutch of the bus was almost burning while parking backwards. But no matter, we finally made it! 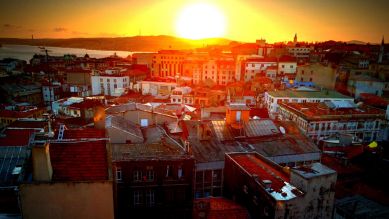 Thursday, September 6, 2012 - We can supposedly get our visas today to enter Iran. For that, we are to be at the Iranian consulate before 12 o’clock noon. No problem, says Coskun, our Turkish producer, at 11 a.m. The consulate is not far away, he assures us, just down the Galata, over the bridge and into Sultanahmet. At 11.40 a.m. we haven’t even crossed the bridge yet. I am getting nervous. Not helpful in Istanbul. What you need here most of all is the ability to keep calm.

We make it to the consulate shortly before 12. But, as expected, we can’t get our visas. They tell us that we have to deposit 600 Euros at a nearby bank and fill out new application forms.

We have an appointment at 6 p.m. with Imam Mustafa Önder and his wife Sati. They are very hospitable – we have borek and tea. Then a very nice moment in the evening: The crew and I meet on the roof terrace of the Manzara House directly next to the Galata Tower.

Sunday, September 9 – Departure at noon and a very special moment: In the flow of steady traffic, without any traffic jams, we cross the Bosphorus Bridge. Welcome to Asia! We have accomplished the first stage of our long journey.

In the Asian part of Istanbul we have a date with Esmeray in a café at the harbour. She was born in a male body, but realized while growing up that she is actually a woman. Kurdish, politically on the left and transsexual – that is being multi-handicapped in Turkey. Many times already has Esmeray enraged the authorities for her courageous statements and articles.

But this meeting is not about politics. Esmeray will foretell us our future using coffee grounds. 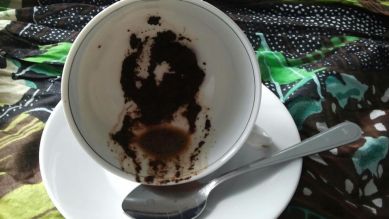 She foresees danger; financial problems and trouble – uniformed people could play a major role. In the coffee grounds she sees a bat, a snake and a frog. All no good signs at all. One of us would fall in love during the journey and the whole crew would be affected by that. We had not expected her prophecy to be so gloomy. But in the end we would reach our goal. The saucer is free from coffee grounds, which means that we would return more wisely from our journey. After that shooting we are all feeling a bit queasy. 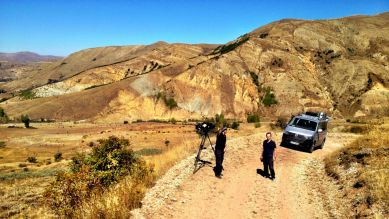 Sunday, September 16 – Turkey. Thanks to connections from Germany we are invited to a village north of Erzincan and are getting lessons in Turkish politics and religion there.

There are two things special about this location: First of all, only people of the Alevi belief live here; and secondly, most of the inhabitants live here only during the summer. Most of them are working in Istanbul or Germany - mainly Berlin - for the rest of the year.

Akdag lies in a high plain that is crossed by a small river. As we arrive we immediately notice that the village is in a very good shape, new roofs everywhere and friendly colours. And the people we see are all old. The young ones are only here for summer holidays.

The Muhtar (village leader) greets us anxiously. He wants this to be a successful day both for us and for the village. He even invited the opposition member of parliament. 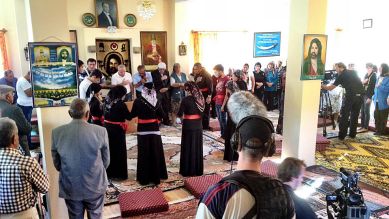 In the afternoon we are allowed to enter a Cem-House, the Alevi house of worship, and film the Cem-Festival there. The whole village, as well as a music and dance group from Erzincan are present for the service. It turns out to be a deeply impressive ceremony, having something very meditative about it.

The opposition member of parliament, himself being Alevi, tells us that the tension between the Sunni and the Alevi in Turkey will increase due to the civil war in Syria. And Mahmud, the old preacher and village elder (“Dede”) shakes his head worriedly. Things will change, but not for the better. It is a warm and sincere farewell.

Then the news in the evening: A commando of the PKK bombed an army bus in the region south of Erzincan, killing seven Turkish soldiers.