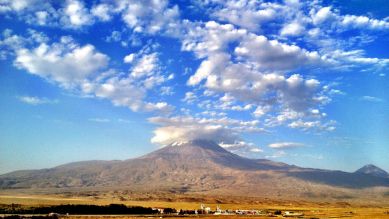 Tuesday, September 18, 2012 - Turkey/Iran. At noon we head towards the Iranian border.

The mountain can already be seen from afar, snow-covered, the peak hidden in the clouds – the sacred mountain Ararat. Hardly any other mountain has so many myths and legends surrounding it.

A lot of hustle and bustle in the border-city of Dogubeyazit. We are the main attraction with our cameras. This city is a stronghold for smugglers. Over the mountains between Turkey, Iran and Iraq, pretty much everything imaginable is being smuggled, most of all booze and cigarettes. The “small border trade” is controlled by Kurdish clans. Throughout the entire year caravans with horses and mules cross the mountains. A pack of cigarettes costs one Turkish Lira, that’s 50 Euro Cents.

In the afternoon we are filming at the famous Ishak Pasha palace, Anatolia’s “Cinderella Castle”. Our guides are two carpet traders who have lived in Germany for a long time. Waiting at the entrance of the palace, they now lure tourists into their shops with tea.

In the early evening then the most beautiful scene; we are filming the majestic Ararat in the midst of the last remaining daylight.

The overnight stay at the hotel bearing the same name is not worth mentioning, however. 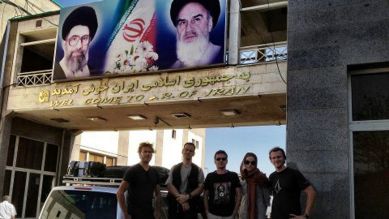 Wednesday, September 19, 2012 - Turkey/ Iran. At noon we finally reach the border. Natalie Amiri, our German-Iranian producer, is waiting for us on the other side.

The formalities on the Turkish side take forever. The customs officials are totally stressed out with our case. Finally, after having waited for hours, we are allowed to leave.

In front of us, on the building just across the Iranian border, is a huge picture of Ayatollah Khomeini and his successor, and on the mountain a giant Iranian flag.

We are the first Western television team in years to have permission to film in Iran. It took Natalie months of hard work to achieve that. She herself has worked for the ARD for a long time, reporting from Iran. Most Western media had to leave the country following the protests and disturbances of the last presidential election in 2009.

Accompanying Natalie is an official of the Ministry of Religious Affairs who is also responsible for “looking after” foreign journalists, as well as his driver. From now on, we are travelling in a convoy and will constantly be “helpfully accompanied” in this for us so foreign country. 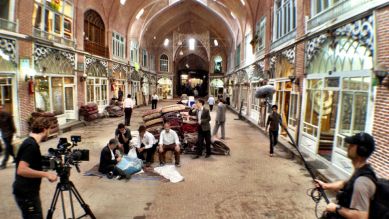 Sunday, September 23, 2012 – Tabriz, Iran. Addendum: Last night we had a frightening incident. Around 10 p.m. there were several severe detonations in short intervals. On the 8th floor of the hotel, I ran to the window and saw big explosions and great fireballs. After a few minutes it was all quiet again.

Natalie, our Iranian producer, explains to me on the phone that there is a training area for the troops nearby. Obviously, the Revolutionary Guards are practicing in case of emergency.

In the morning, through dense traffic, we drive to the bazaar of Tabriz, one of the biggest and most beautiful in the world. Here is the economical centre of the Northwest of Iran. Trading has been going on for centuries here, regardless of who rules the country. The bazaar consists of a countless number of small alleys, roofed shops, vaulted courts, halls and many old caravanserais. Tabriz was an important station along the legendary Silk Road.

We film the colourful hustle and bustle within the labyrinth consisting of alleys and junctions, especially at the famous carpet bazaar. This is the land of merchants, dyers, washers, weavers, fringe makers and exporters.

We get the nicest shots following a tea courier trough the alleys delivering Chai to his befriended merchants.

No effects of the embargo or of the financial crisis are to be seen here. On the contrary: The city of Tabriz seems to be rather wealthy and well kept. But we hear from various people, especially while the camera is not running that the economical situation in Iran has gotten very bad due to the sanctions of Western countries. Especially the price for food is rising drastically. 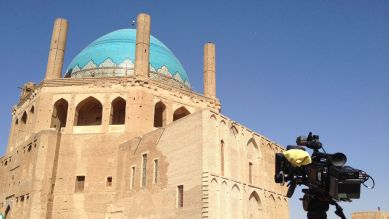 Monday, September 24, 2012 – Iran. We leave Tabriz heading to Tehran. Trying to get some petrol along the way, there is trouble. The power at the petrol station had failed. Wanting to film how we fuel up our vehicle using our spare canister totally enrages the owner of the petrol station. All we wanted was to show German television viewers just how bad the provision in Iran actually is. And in this case it was only a short power failure.

Halfway to our destination we pass the village of Soltanieh. Already from afar we can see the luminous blue dome, the worldwide biggest of its kind.

For many years now the impressive edifice is being restored. The leading restorer, Parwaneh Askari, works in vertiginous heights on the scaffolding. Proudly she tells us about the wonders of Islamic architecture. The Soltanieh Dome has withstood almost 700 years of wars and earthquakes.

I automatically offer my hand wanting to thank Parwaneh Askari. The restorer is startled and looks down on the floor.

Our escort from the Ministry of Islamic Education tells me that in public, no woman is allowed to shake hands with an unknown man. So we leave it at nodding our heads politely. It is already dark as we reach the outskirts of Tehran.