From the vibrant Persian metropolis to Uzbekistan in Central Asia. The once most important trade route in the world is still visible: The Silk Trail that had already connected Asia and Europe hundreds of years ago. 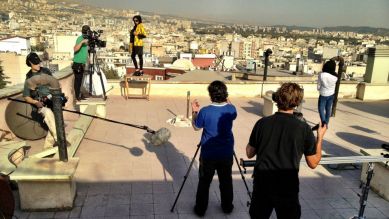 Tuesday, September 25, 2012 - Tehran is a big city jungle with about 12 million people. And all are on the road at once. Jammed streets. Honking horns. Smog. Yet the city somehow functions day after day. The Ministry of Education has booked rooms for us at the Hotel Laleh, a big conference hotel with a real-socialist charm to it.

We go out to shoot some impressions of the city in the morning. Thomas is filming a big group of men in front of the bazaar. They are haggling and waving bank notes. It is black market for currency. Here, you can trade the almost worthless Iranian bank notes to dollars or Euros. The fall of the Iranian currency is dramatic; the official cash flow has practically come to a halt due to sanctions of Western countries.

In the afternoon we can literally take a deep breath on the rooftop of a high rise in the North of Tehran where we are invited to film a photo shooting. Naghmeh Kiumarsi is a young fashion designer. The secret of her success: She combines high quality fabric and forms with Islamic dress codes. She literally cuts the edge to what the strict morality guides allow. The two models pose elegantly. The photographer tells us that they are almost the only two models they were able to book in Tehran.

After more than three weeks of countries with Islamic culture, we enjoy watching the two beauties. In the cityscape we only see veiled women. The following Islam proverb offers only little comfort: Veil and garment are to protect the beauty of the women, as a shell its pearl.
PHOTO: 102 Photo shooting of a young Iranian fashion designer September 25, 2012 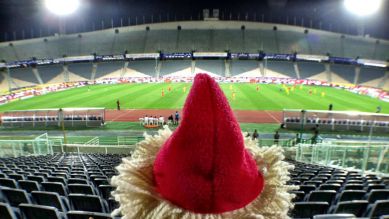 September 27, 2012 - A day off from filming. We meet for lunch with an Iranian colleague reporting from Tehran who works for a foreign television station. He is very pessimistic what the future is concerned. For him, war is inevitable.

Both the West on the one side and Iran on the other side have reached a dead-end street. It only needs a straw to break the camel’s back. And, even though nobody really wants the war, the constant sable-rattling with Israel will inevitably lead to confrontation.

Another highlight in the evening: The team expressed the wish to go see a football match in Tehran. Our wish is the command for the Ministry. We are invited to see a premier league game: Persepolis Tehran against Aluminium Hormozgan. There is only one catch: The match is played in the large stadium of Tehran without any audience! Normally, it can seat up to 100,000 people! 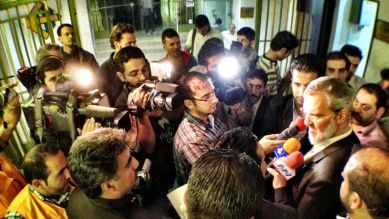 But because of rioting fans, Persepolis is being punished and has to play its home game in front of empty seats. Empty – apart from a few substitute players, the chairmen of the clubs, a few soldiers and security people, and the rbb-team. A very memorable match for us. Persepolis wins 1:0.


After the match we are even allowed to talk to the powerful chairman of the state club. We give him a farEAST t-shirt. Our escort from the Ministry is obviously delighted. Thanks to him, we have had a very entertaining evening. Football brings people and cultures together. 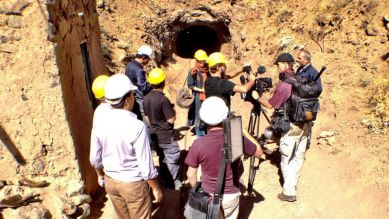 October 1, 2012 - We had an overnight stop in Mashhad. In the morning we drive to Nishabur, about 150 kilometres away, to the famous turquoise mines. The best turquoise has always come from Persia. Already 3000 years ago, the blue-green stones have come from the mines near Nishabur.

The jeweller Mohammad Reza Mozaffarian from Tehran spontaneously joins us. He would love to visit the place he only has heard of in stories from his grandfather. During the Shah’s reign, the court jeweller leased the mining rights of Nishabur. But during the Islamic Revolution, his family was expropriated. Many relatives left the country. “I decided to stay, because I love my country”, says Mohammad. 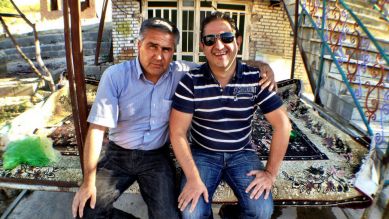 The mine is hidden near the village Firooze in the mountains. Together with the foreman we enter the tunnel system, which took the mine workers centuries to dig into the mountain. In small caves and vaults, the men blast away boulders and search for sparkling gemstones in the rocks. The most precious turquoise in the world is from Nishabur. In other countries they are re-coloured, here, they naturally shine blue-green. 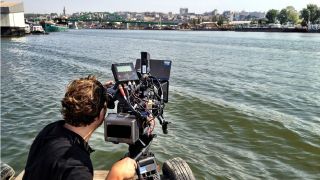