From the heights of Central China, Tibet being just around the corner, we travel over highs and lows to the earthquake-shaken country of Myanmar, home of Nobel Prize winner for peace, Aung San Suu Kyi.

During the whole trip we are separated from Tibetians living in China, and are only allowed to shoot under strict regulations. We meet very friendly and hospitable people in the midst of splendid surroundings.

Tuesday, November 6, 2012 - We have been in the country for two days now, our luggage had disappeared further ado, but reappeared just as suddenly. We travelled with the Qinghai-Tibet Railway, the highest railway of the world. Most of the trip between Golmud and Lhasa is at an altitude of 4,000 metres. Today is our first day with the team. We are in Golmud, which seems only to consist of big streets and new, tall buildings. Many of the supermarkets have basements. They were built as bunkers during the time of the Cold War in fear of a Soviet nuclear attack. "Dig deep tunnels and store grain", was said at the time. Since we plan to travel up to an altitude of 4,700 metres the following day, Jürgen organized a doctor who will check our pulse to see if we are fit for high altitudes. 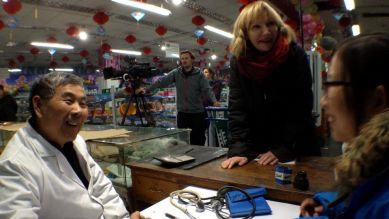 The "pulse doctor" with his weathered face sits in a traditional Chinese subterranean
pharmacy right next to a modern pharmacy, containing a countless number of ointments, crèmes and shampoos. We are all at best health. 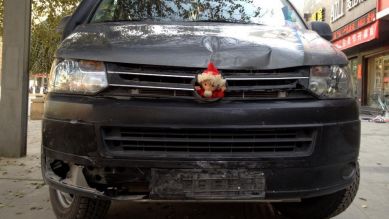 On our way back, the streets are totally packed - three to four vehicles are driving side by side on a two-track road. Then the crash - "Vasco" (one of our vans) collided on a confusing junction. Luckily, no one was injured, but both vehicles are badly damaged on the body. Our van has several dents in the front, but is still able to drive. 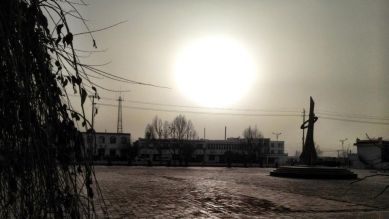 Friday, November 11, 2012 - After a hearty breakfast with broth and pastry we head for the Chaka Salt Lake. This typical chloride-salt lake has an area of 105 square kilometres. The salt of the Chaka Lake is exported in over 20 provinces and cities, even to Nepal and Japan. 440 million tons of salt are said to lie here. We travel at an altitude of 3,500 meters and carefully drive over a mountain pass. On the other side of the road, an endless row of trucks drive at walking pace. 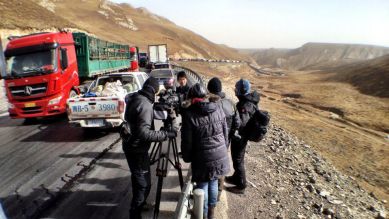 Then we are stuck, a lorry missed a curve in front of us. On the other side, a driver tries to get his semitrailer started. After two hours, someone arrives with tools for the broken down lorry. A kind of flamethrower and hammer are used to repair the lorry's axle. 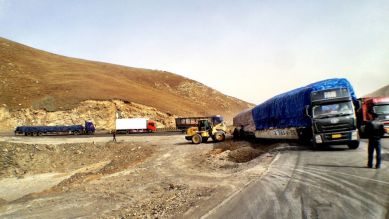 Finally, they begin to regulate the traffic and we can continue. A big relief, since it has begun to snow. The landscape is slowly changing, hardly any mountains anymore, but vast country as far as the eye can see, and big herds of yak. We are at the Qinghai Lake, the largest lake in China. 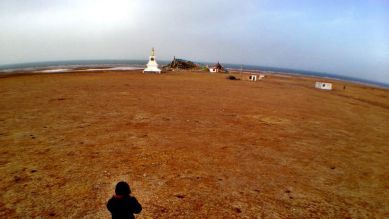 During the summer, this is a paradise for birds and overrun by tourists. It is already frozen here and there, the sun dipping the lake in a cold light. In the evening we reach Xining, and this time we can check in without any difficulties. 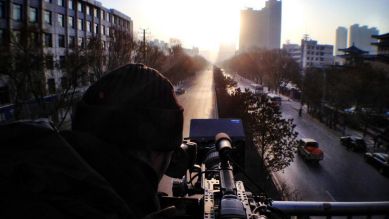 Saturday/ Sunday/ Monday, November 10, 11 and 12, 2012 - Unfortunately, our trip falls together with the 18th Party of Congress of the Chinese Communist Party. The security precautions are extreme, before each interview we first have to ask our Chinese escort. Several self-immolations of Tibetans taint the Party of Congress beforehand. In the district of Tongrem, here in the province of Qinghai, a person ignited himself on Wednesday out of protest against how the minority is treated. The convent, in which we wanted to shoot, lies in an area inhabited by Tibetans. So we don’t get a permit to shoot. We are baffled. And hope that it won't continue like this. 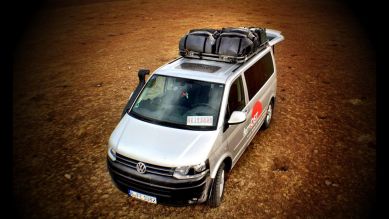 We found a garage for both our vans. "Vasco" needs to have the front side repaired, and “Maggi's” power steering does not sound good. Then the bad news; the hydraulic steering pump is defect, a new one needs to be ordered from Germany. 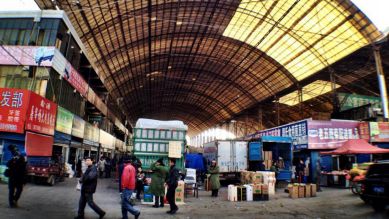 In the meantime, Thomas and Jürgen have discovered a market around the corner. We find out that it is the biggest agricultural wholesale market in Northwestern China. For the moment, we are allowed to shoot there, but without interviews, since we are not registered for the market. Then we dive into the jumble of merchants, three-wheeled motorized carts, and the hullabaloo of people. We are fascinated. On an area of 16,000 square metres you find all that you desire: Cabbage, leeks, radishes, garlic, Brussels sprouts, tomatoes, cucumbers and many vegetables and fruits that we don't know. 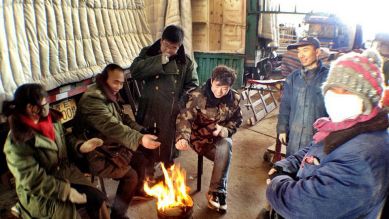 Finally we are allowed to shoot interviews at a temperature of 10 degrees Celsius. Around a small fire site, merchants are sitting and playing chess next to three giggling women exchanging the latest news. 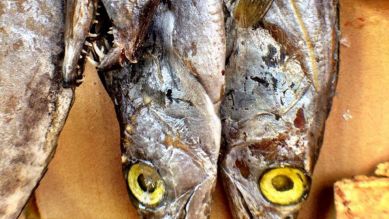 At a fish stall we hook up with a cook who is bargaining for goods. Would he allow us to shoot in his restaurant the following day? We are invited on Monday. In the narrow little kitchen Thomas shoots incredible images of burning flames in the wok, of shouting cooks and exotic dishes. 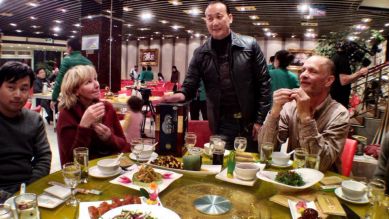 Rounding it up, we toast to the team and to us with a 20 year-old schnapps.