From the metropolis Ho-Chi-Minh City we drive up north along the Vietnamese coast passing tropical villages and old coast towns, until we reach the subtropical city of Guangzhou in China. Christian Klemke directs this stage. 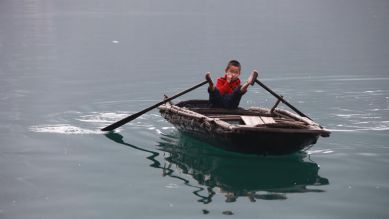 These children probably learn to row a boat before they learn to walk. Artistically they row the boat using their feet. They lay back in their bamboo basket boats and move the oars using their feet.
After eating lunch on a ship we head for Hanoi. We can sense that slowly the chaotic traffic on the streets is getting to our drivers Ingo and Gregor. The last 40 kilometres to Hanoi are on a four-lane street, where the traffic runs almost normally. 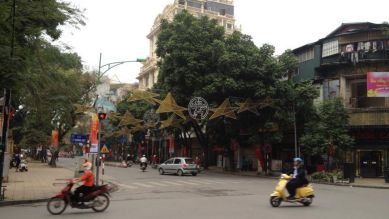 Tuesday, February 5, 2013 - It is again very hot and humid. We will leave the very good hotel in Hanoi to head for a pretty remote village. There awaits us a little cultural treasure. Farmers of the village are playing theatre. Not as actors, but with puppets! In the water! Just for us... for the camera, that is. It is a pleasure watching them. One more thing worth mentioning: Thomas and Gregor are shooting, but Thomas is shooting in the water, in a borrowed chest wader in Vietnamese size. Which means, it was of no use to him. 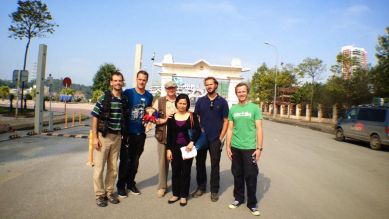 Thursday, February 7, 2013 - It is the day of passing the border from Vietnam to China. Tram accompanies us to the checkpoint and takes care of the formalities for us. Another goodbye, because Tram’s family awaits her at home... The Tet Festival, the Vietnamese New Year’s Festival, is the day after tomorrow. 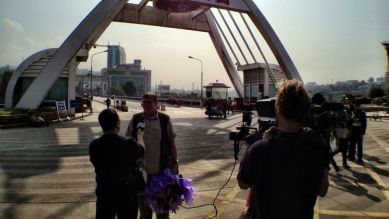 She was simply irreplaceable for us and has become a dear friend. On the Chinese side, to our great surprise, we are welcomed by dignitaries and a local tv-team with flowers and food. They interview us and take photos while we shake hands and give speeches. 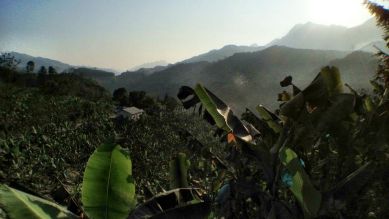 First we have to deal with a few formalities concerning Ingo’s and Gregor’s Chinese drivers permission, then we are on the road again. In the mountains on a wild serpentine road, passing incredible landscapes, from jungles to endlessly spread out banana plantations. Night has fallen again, making driving a difficult manner. We spend the night in Yanshan. 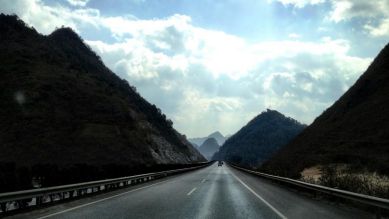 Friday, February 8, 2013 - After an unpleasant mountain trip we are now back on the highway. Accompanying us is Jürgen - called “Yügen” in Chinese, our China-expert from Berlin. He has been here before us and has done some research beforehand.
There is also Mister Xu Shusheng from the Chinese capitol, who is invaluable, since he can pave the way for us and open doors. Those are our companions in crossing China, and today driving on the highway on our way to Yulin. So far, so good, we must have travelled 750 km today. Our dinner was, well... Chinese. 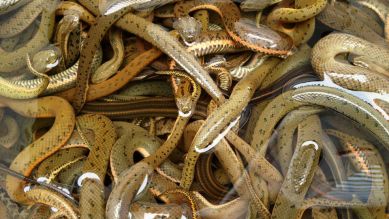 Saturday, February 9, 2013 -In the afternoon we reached the village Foshan.
The village turns out to be a metropolis of a million with sky scrapers! We apparently still have to get used to the shifted relations. But Foshan is a city preoccupied with itself. Almost all shops and restaurants are closed, but the Foshan inhabitants are in the mood to celebrate. Tonight, everyone welcomes the year of the snake with their families. Well then, Happy New Year! 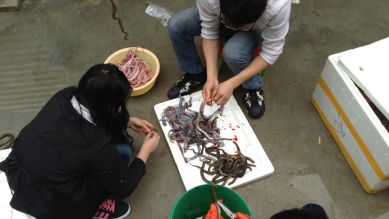 Sunday, February 10, 2013 - Today, all Chinese are back and all seemingly assembled in front of our hotel. Opposite the hotel is a Buddhist shrine that the people are on a pilgrimage to. And today is another day off. Jürgen and I were doing research in a neighbouring town. Here, there exists only city around the megacity of Guangzhou. Travelling on foot is impossible, since everything is gigantic, the streets, the highways, the residential areas, the sky scrapers, the malls, the bridges, the towers... Everything, except for the people. We remain the same. 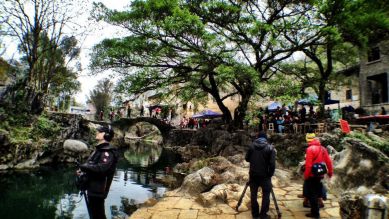 Tuesday, February 12, 2013 - We are on our way to Guangzhou, driving on enormously wide highways. Jürgen, our China-expert, guides us through the city centre to the old town – there, Guangzhou is beautiful. We are envious, since Jürgen seems to speak Chinese very well, which is of advantage here. Tomorrow, we will visit a very old village…