From China to South Korea. We are only allowed a glimpse of the border to North Korea, we have no permission to enter the country. Tense atmosphere on the first part of the stage, which will relax once we have passed Seoul.

North Korea surprisingly invaded and progressed up to the South Korean coast. There, US-troops helped the South and fought back the troops into the far North, where China intervened with a so-called voluntary army. In the following three years, a fierce battle was fought with all possible means, costing millions of civilian lives, until finally, after countless negotiations, a truce was agreed July 27, 1953. And the border on the destroyed Korean peninsula was set o 38 degrees latitude. 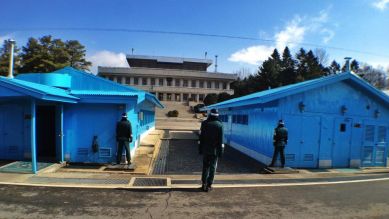 So here we now are in Panmunjom, where the rivaled brother faced each other. The border is marked only with a line running along the floor, running right through the blue baracks, which, following an accurate schedule, are used both by the North and the South.This is the only place where the other side is only a footstep away. A seemingly absurd situation. 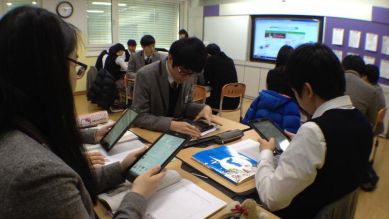 The next day we visit a model school in the modern satellite city of Sejong, a so-called smart school. Even the youngest pupils have state-supported ipads. All teachers have a wipeboard, with which all media can be used for the lesson. Teachers and pupils, but also pupils among themselves communicate digitally. This is how Korea prepares the next generation for the future. Within the next five years, pens and books are supposed to have completely vanished out of the classrooms. If you compare that with the ecquipment of most of the German schools, you can only marvel. 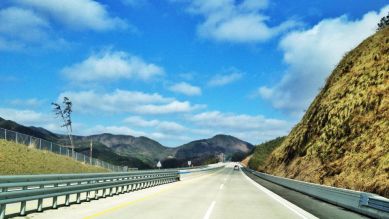 Monday, March 18, 2013 - We make a short stop at the Jirisan National Park. We want to spend the night there in a Buddhist monastery. 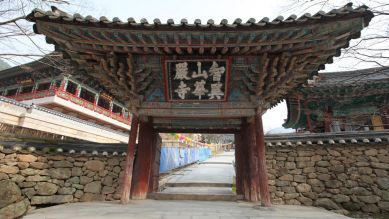 The driveway to the impressive temple Hwaeomsa is ornamented with lamps. As we arrive around 6 p.m., a monk and a nun await us to give us a quick overview over everyday life here. A part of that is going to sleep at 7 p.m., because the drum ritual for the morning prayers begin at 3.30 a.m.! Well, we did know beforehand that it is about simpleness, combined with nature and emptiness, to attain enlightenment. 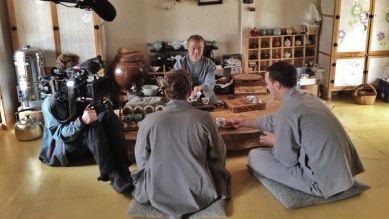 Smoking and alcoholic beverages are prohibited on the entire terrain. If we behave in a quiet manner and disturb as little as possible, we are allowed to go anywhere with our camera. The monastery is very outgoing for visitors, by the way, and offers several programs containing a temple stay, no matter which belief, religion or prior knowledge. 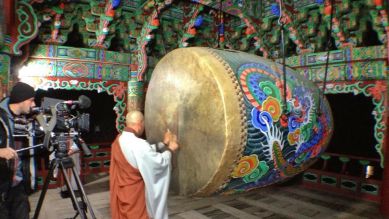 After a short night Thomas, Ulli and I meet at 3.20 a.m. ready to shoot. The other team colleagues can decide for themselves, whether to join us, or not. Because Ingo and Gregor have to drive tomorrow for quite a long time. But all are up, as the drums sound in the pitch-black night. 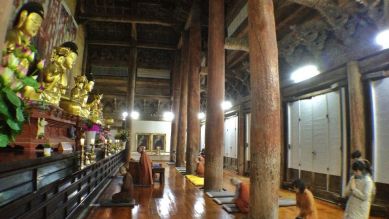 The morning prayer has a very intimate atmosphere, where each person individually humbly bows to/ before nature. At the end of it, it is still very dark. Then, reluctantly, the break of dawn comes. But still hours will pass, until the sun sends its first warming rays over the mountain tops. The mountains have a special meaning to the Koreans. They connect heaven and earth. And they offer a feeling of security, a monk tells us. Like a child is being nourished in the womb with vitality/ life force, that is how he feels in the mountains. The way he lightfootedly walks along the ridge through the bamboo forest, he looks like a motive from an old Korean silk picture/ painting. 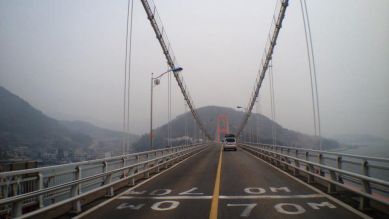 We are driving towards the coast again. Our goal: the German village on Namhae Island. The bridge reminds me a bit of the Golden Gate Bridge in San Francisco. As we pass the sign ¨German village¨ at the beginning of the village, we instantly feel at home. Houses with red roof tops, neat front gardens with ¨Gartenzwergen¨, garden elves, ¨Mainzer Haus and Café Bremen. 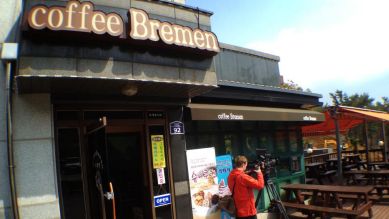 On the street we are invited to a German dinner! The German village was founded over ten years ago, for... From Germany, who have worked for decades in Germany thanks to the. ... From the 60ies. The women as nurses, the men as cole miners. 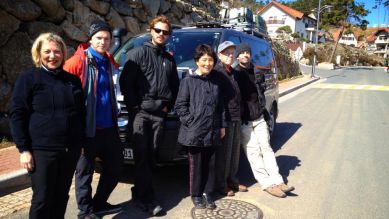 We have all grown to love South Korea and its people. The new bumper stickers on the rear window of Vasco and Maggie are proof of that: Special thanks - Kamsahamnidaaaaa - to Lupi, Yoseph and our level-headed driver, Mr. Seo.

Thomas, Ulli, Gregor and Ingo: You guys are sensational, each and every one of you, and invincible as a team! I wish you many more great adventures, encounters and stories on the last part of the trip. Have fun completing the adventure well. In four weeks, you will be home again, as well.