From China to South Korea. We are only allowed a glimpse of the border to North Korea, we have no permission to enter the country. Tense atmosphere on the first part of the stage, which will relax once we have passed Seoul. 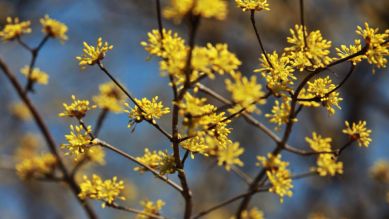 Sunday and Monday, March 3 and 4, 2013 - We leave Peking. Despite the sun and the clear, blue sky lies a blanket of fog over the city, as so often during this winter. We take the highway towards Shenyang. The Asian Highway No. 1 leads us to the city of Shenyang in the Northeast of China, 700 kilometres away. The yellow-grey fog and odours follow us for hundreds of kilometres. To the left and the right of the road lies nothing but exploited landscape, flat and dreary, industry side by side. It is the largest economic centre of the country. "Rusty earth", this part of the country was called, because of the emissions of the heavy industry, the "Ruhr Area" of China, the former Manchuria, country of banishment. 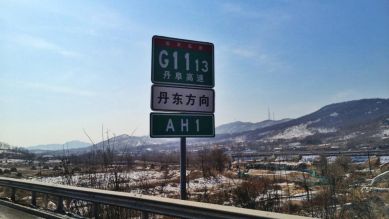 Tuesday to Thursday, March 5 - 7, 2013 - We take the highway from Shenyang to Dandong, the last Chinese town on the border, about 300 kilometres to the east. The Asian Highway No. 1 is in good shape and signposted well. The landscape is becoming more mountainous and the signs on the side of the road bilingual - Chinese and Korean. 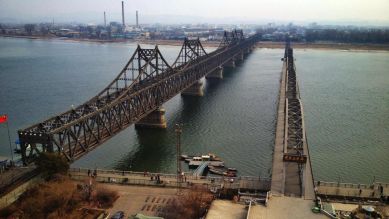 Dandong is a relatively small city with merely 2.5 million people, it offers especially one thing: A view to North Korea. On the other shore side of the Yalu River is the North Korean border town of Sinuiju. Both cities are connected via railway bridge that can also be used by cars, but only if you have a visa for North Korea: The Chinese-Korean Friendship Bridge. Right next to it is another bridge leading halfway into the lake. It was left as a memorial: The Yalu River Broken Bridge was destroyed by US-American bombs at the beginning of the Korean War in 1950. Out of a speaker chimes the "Arirang" in an infinite loop, it is the song of yearning for all Koreans.

At night, the North Korean side lies in total darkness. Dandong illuminates its. .. all the more colourful, also the trees and high rises. And the Friendship Bridge has lights that playfully change their colour. But the relationship between China and North Korea is as tense as ever. For the first time in history, China wants to take the side of the USA in the UN safety council and demand stricter sanctions. We feel the tenseness here, as well 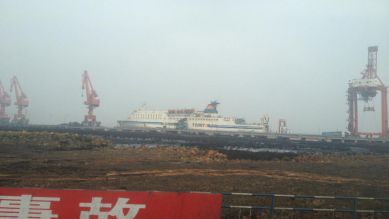 The next day is completely reserved for travellling. Because the North Korean testing of the atom bomb has crossed our initial travelling plans. For half a year our request for visiting North Korea had been on its way from Berlin to Pjönjang, and the chances were good. North Korea is part of the initiative of Asian Highway No. 1.

On the drawing board, it leads to Pjöngjang and then, theoretically, further up/ down to Seoul. But our journey on the Asian Highway ends in Dandong. Shortly before the nuclear test, we were informed by North Korea that our entry in March is not possible, after all. For a few weeks now, Jürgen has been. .. with Chinese and Korean authorities, with the toll and with. .. and has achieved and absolute exception for the farEAST team: Maggie and Vasco are allowed on the ferry, so we can continue our journey from Dangdong to South Korea in the port of Incheon. 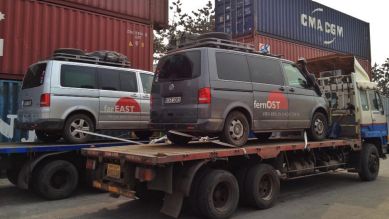 Friday to Tuesday, March 8-12, 2013, Seoul - Arrival in South Korea. We are greeted by our friendly Korean team; Lupi, Yoseph and Ethan. There is no agreement between China and South Korea allowing the tranportation of private vehicles. The Koreans, however, are very helpful and inventive, making the impossible possible. First of all, our vans are put on a transporter, the roof... are dismantled, so that the vans fit into a container. Then, the container is bein lifted from the transporter with a huge crane. Then, finally, Vasco and Maggie are standing on Korean grounds. In the evening we finally arrive in the capitol, in Seoul. 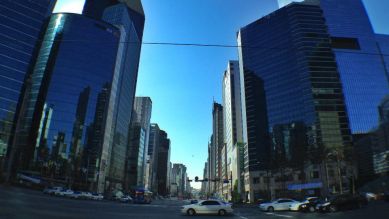 Compared to China, we first notice how disciplined the traffic rolls in this 10 million metropolis. Then we notice how clean the city is. No piece of paper flying around, no cigarettes, not one single pile of dog poo/ waste.
And how friendly and curteous the Koreans are. They smile, even if we have acted in a disrespectful manner, without being aware of that, according to their complicated etiquette. They try anything to restore harmony.

The Korean language knows many different words to express each social stand of the addressed person. One must not be surprized to be asked how old one is, because the oldest holds the honour. Based on the principles of Confuscious, they still are valid nowadays. I find it a treat compared to our own society, in which youth counts alot, and experience very little. The principle of harmony, yin and yang,is important for a good place. 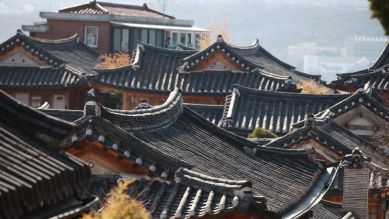 The old Seoul was purposely built on a good place. The mountain in the background protects and gives strength, the river in the front of us. Here, it is the broad Han. The old district, Bukchon, situated between mountains and the river, is a well-restaurated part of Northern Seoul, despite the Japanese occupation and the Korean War, which has brougth alot of destruction to the Korean peninsula. It has the imperial palace and living areas in the historical Korean architecture. With the curved roofs, walls made out of natural materials and formerly with a floor heating system out of burning wood. These houses truly have a wonderful aura. 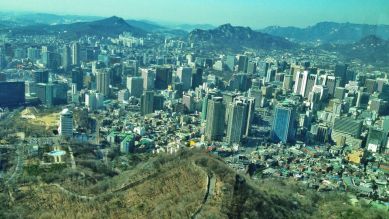 We then drive to Gangnam, which became world famous thanks to Rapper Psy who grew up here. In his song he makes fun of the lifestyle in this hip part of town. Gangnam literally means ¨South of the river¨. Our guide Lupi tells us that 30 years ago, there was nothing but rice fields here. The farmers were able to sell the land for 1.000 times its original worth and became rich; ¨Real estate rich¨. Today, it is the business and financial centre of Seoul, and the most popular, it-part of town. An apartment in one of the high rises here is more expensive than in Central Park in New York. Gangnam has become a symbol of wealth, luxury, ¨making money¨and recreation, shopping, expensive bars and self-displaying. 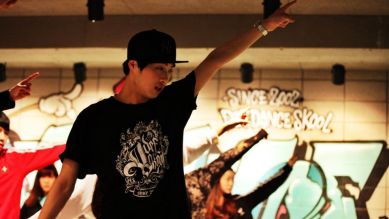 Now we are looking for the Gangnam style live, but it is not that easy. In this fast-paced city, it is already a yesterday-dance! Still, we are able to find a dance studio in Gangnam which is willing to perform the dance for us. We beg and tell them that we are unable to return home withouth having filmed here, at the original place, and that we are very interested in the newest trend, of course.

In the evening we hear in the news that North Korea has broken with the peace treaty with South Korea and has shut down the emergency telephone line between the two countries. We do not notice any of that in the city. Our Korean guides tell us that they have been living with this threat since 60 years, just as others live on volcanoes, or on the earthquake belt. Tomorrow we will drive directly to the Innerkorean border. It is a miracle that this date, which had been planned ahead in advance for a long time, has not been cancelled due to the enormous tension. In the next part of our travel diary there will be more of the tragic history of this last divided country on our planet.

Wednesday to Saturday, March 13-16, 2013 - Today we drive to the Inter-Korean border. Despite the disturbing threats of warfare from the North, our date/ appointment has not been cancelled. We have to leave our vehicles at the checkpoint. There is also a BBC television team there with us. American soldiers take us to the information centre for a short briefing. We get an overview over the best guarded border of the world. 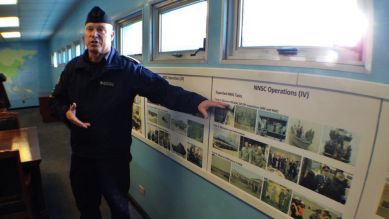 DMZ is under the protection of the United Nations. On the actual border, there are neutral observers from Switzerland and Sweden. They record all incidents. In the corridor, which is four kilometres wide, the heavily guarded border lies, 241 kilometres long, from coast to coast, right through the country. The division of the land was not self-made. After the united Korea has lived peacefully for many hundreds of years and had good relations to its neighbours, especially to China, in the 20th century the country plunged into the catastrophy.

At the end of the Second World War, with Japan having capitulated, which is still being celebrated in both parts of Korea to this day as independence day, Korea had the hope of rising again as a free country. But after only a few days, the country became a victim of the Cold War. The Sovjet Union took over the North, the USA the South of the country. A few years later both countries withdrew their troops from Korea. As soon as both parts had elected their political leaders, the Korean War was started in 1950.