On this part of the journey, China presents its large cities! We travel from Guangzhou to the capitol of Peking, passing Huangyao and Guilin. Impressive limestone mountains characterize the South Chinese landscape. No matter where we go, it seems that there are always 100.000 tourists there before us. 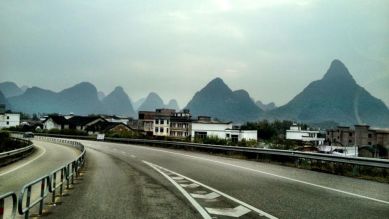 Wednesday, February 13, 2013 - Huangyao is the village we have been trying to find on a map for days. On our way to Huangyao we break the limit of 27.000 kilometres that we had set for the entire journey. We have left the warm South of China and are heading up North. The village is about 1000 years old. If a movie wants to show the old China, then this is the place to be. An incredible scenery has been preserved here. It is an enchanting village by the riverside. Some small alleys wind their way between the low-built houses with those typical Chinese rooftops which are gently curved with their stone arches on the ridge and the fiery dragon on the edge of the roof. 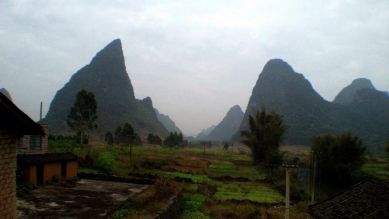 Thursday, February 14, 2013 - We have to get up early. The landscape is only supposed to be idyllic between sunrise and 8.30 a.m. So we begin shooting at 7.30. Then the first crowds of tourists arrive, from hotels, accommodations, busses and cars. All paths are blocked with the bits and bobs of the souvenir dealers. Jürgen tells us that the Chinese like company. I am not sure about that. What is the sense of a sightseeing tour, if you cannot view the sight because of the many people?

Friday, February 15, 2013 - On our way to Guilin, from the very start, the incredibly beautiful landscape has infatuated us. The rugged mountain hills of the karst mountains as known from paintings. Can it get more Chinese? Constantly new views and panoramas. So Thomas was shooting until the chips were burning. 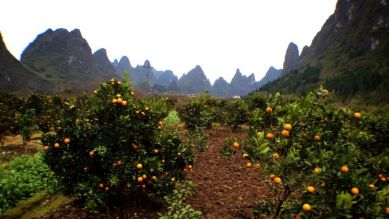 Since citrus fruits are growing everywhere on our way to Guilin, we decide to find a farmer to get some information.
We shoot during the tangerine harvest in the mountains. The harvest helpers were extremely friendly and very cheerful. One of them talked with a very heavy tongue. So now I know how it sounds when someone is slurring their speech in Chinese. That was very interesting... from a mere linguistic point of view, of course. 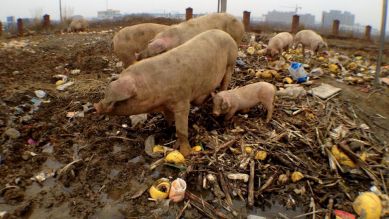 Saturday, February 16, 2013 - Primarily we wanted to drive to Changsha, 450 km away. We ended up driving to Wuhan, 850 km away. Without any problems, swiftly on a free motorway. Ingo and Gregor, who are sitting behind the wheel the whole time, were still lively and cheerful after all that driving. Driving in China cannot be compared to driving in Vietnam, because you can't compare the streets. One can presume that traffic rules exist in China, because a few of them seem to be known to Chinese drivers. I did not have that impression in Vietnam. 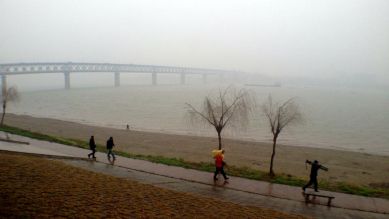 Sunday, February 17, 2013 - Today we have a day off. Jürgen and I were doing research, we were looking for the old bridge over the Yangtze River. The great river divides the country into North and South China. And for a long time, there was no bridge connecting them. By the way, Mao Tse Tung once swam across the Yangtze River. Not because of loved ones, but because of power. The Soviets began building this bridge in the 50ies. But then Mao and Khrushchev had a dispute and the Russian left, along with the construction plans. 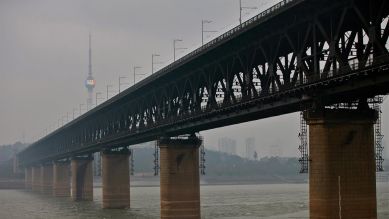 The Chinese completed the bridge superbly, and so it still stands. The bridge was covered by fog, but looks like a bridge on the top. But seeing it from the coast it is gigantic. It is very high and two stories tall, on the bottom for the train, on the top for road vehicles. Tomorrow we will shoot there.

Monday, February 18, 2013 - We are not in the Chinese tropics anymore, no doubt about that today. It is stormy, it is raining, it is bitter cold and foggy. 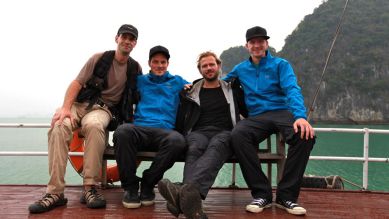 Gregor is the youngest in the team, he is somewhat like a "quiet worker in the vineyard of the Lord", he is.. how should one describe him? He is simply a 2fine person", maybe like that. Not only does he drive our team van no. 1 with the equipment, but he is also the second cameraman (not necessarily in that order). I will describe it in military-style: He is the raiding patrol when Thomas is the main army. He is sent into the unknown alone with the camera, and delivers all the takes necessary for completing a story.

We met a young engineer on the bridge, who immediately sent for somebody who helped construct the bridge in the 50ies. The old man was about in his mid-eighties, but very vital and cheery. It was a pleasure listening to him.
We interviewed him in an old, dusty, formerly pompous reception hall of the bridge, which had obviously been requisitioned by the military. The bridge is guarded. They just had changing of the guard, and constantly ran into the frame. Our good and helpful friend from Peking bravely argued with the People's Army on our behalf, until an officer arrived and called off his guards. Good job from our man from Peking, respect! 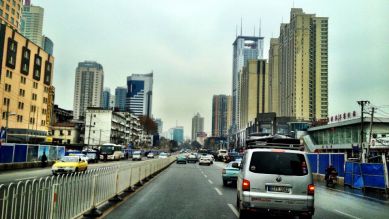 Wednesday, February 20, 2013 - Today we drove from Wuhan to Kaifeng. I already mentioned that Chinese drivers most probably know a few traffic rules, perhaps even all of them. And pedestrians, especially at zebra crossings and on pavements, are thought to be an extreme nuisance to Chinese drivers.

Jürgen had warned us: "Never stop when a pedestrian is stepping on a zebra crossing, it could be their death sentence!" So we have experienced it: Ingo stops, the pedestrian steps on the road, and the car behind us passes us showing no mercy and speeds over the zebra crossing. But our Chinese pedestrian sensed that it was a trap that Ingo had accidentally set and thus survived the daily adventure unharmed. 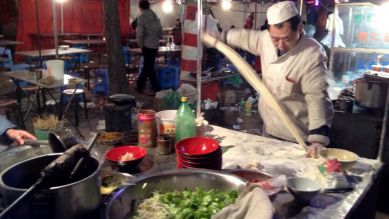 We arrive in Kaifeng in the evening and visit the night market. There, we marvel at the Chinese noodle pullers who are very artistic with their dough. ... It was the finest Chinese dinner.

Thursday, February 21, 2013 - Kaifeng is situated by the Yellow River. A Swiss newspaper once called it the "offside imperial city", since an imperial dynasty ruled here a long time ago. Also, because the city has not been plastered with high rises yet. We shoot in a stinking street. That is the same street that turns into a culinary market at night, into one of the most famous in China, mind you. The street then offers the most distinct scents, sweet, aromatic, unknown, wondrous, but also peculiar. 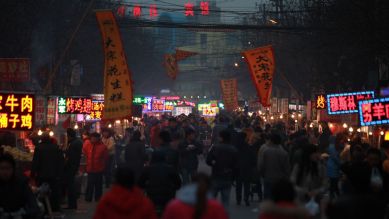 The streets are packed at dinner time between 6 - 8 p.m., everywhere is being cooked. The odour is extreme. But a true Chinese probably thinks that a Harz cheese stinks, as well. Anyhow, I can report that after shooting on the night market of Kaifeng we had two cases of indigestion in our expanded travel group. 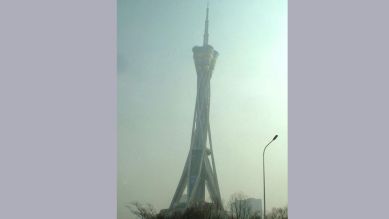 Friday, February 22, 2013 - The planned two hour trip to Dengfeng turned out to be five due to an unplanned flying visit to Zhengzhou. It is also a megacity, and this tower reminds us of home!
The trip takes longer because of the many obligatory stops: the indigestion from yesterday is leaving its trace.

We shoot in a Shaolin school and are impressed by their discipline and perfection. Even the youngest are full of vigour.
I think that soon Shaolin will attain a ® as a registered trademark. Because there is a lot of arguing over the name Shaolin. Why? Because you can make a fortune with it. Really! Every former active Shaolin warrior monk opens his or her own Kung-Fu school in Dengfeng.... with thousands of disciples, no lie. 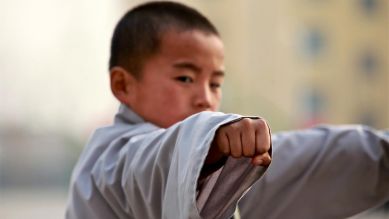 I feel sorry for the little children. The atmosphere in the schools is like that of a Prussian military base. Who needs so many Kung-Fu fighters? The film industry? The sector of night watchmen? The bouncer scene? But perhaps I am unfair. It is surely a wonderful thing to break wooden boards using your head. 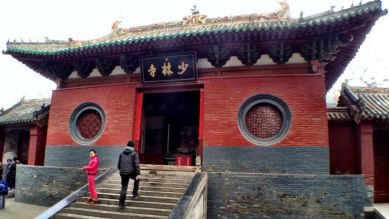 Saturday, February 23, 2013 - On our way to Shijiazhuang we briefly stop at a Shaolin monastery. The highway was empty, so we were already in a city hotel in the evening. Shijiazhuang is the capitol of the province of Hebei, and the major part of the city is brand new. 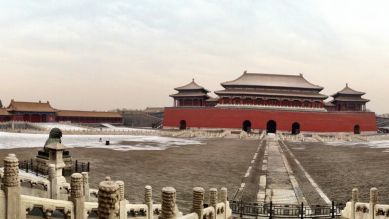 Monday, February 25, 2013 - Today was another day off and each went his own way. We all met coincidentally in front of the Forbidden City, where the imperial palace is located. We were channelled through several back doors and separate paths into this unique cultural site. Suddenly we stood in the forecourt of the imperial palace. Exactly there, where usually thousands of tourists step on each other's feet. We were let into the Forbidden City on a closed day. No guards, no porters, no one to tear off the entrance ticket, no one. Even the emperor of China has never seen his palace like this. It was a very memorable event to me. 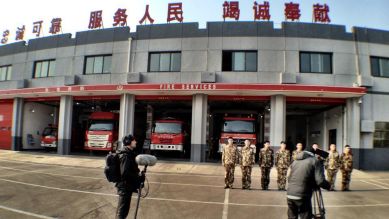 Tuesday, February 26, 2013 - Today we are shooting at the fire station No. 45. One must know that the fire department here is part of the Chinese military. I ask if any Western television team has ever had an insight into the everyday life of the Peking fire department before, the Chinese official says: no, not one! And nothing was tense on this day of shooting. They quickly got used to us and were helpful with everything.
The whole fire department was tuned into us. Just not during alarm, which we had twice. Once we even made it keeping pace with them. Gregor was the emergency driver. Respect, Gregor! 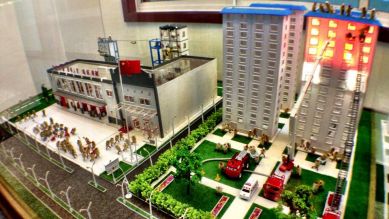 The fire station has one special feature: A very detailed model of the station with little figures affectionately made out of catkin with glued on bug limbs. 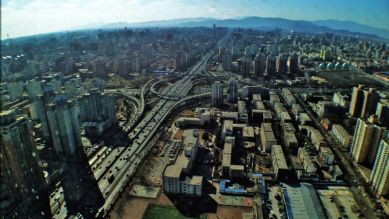 Friday, March 1, 2013 - In the morning it was freezing cold but sunny. The wind seems to come from Siberia. Today was our last chance to get a few city shots of Peking, and Thomas laboured hard. But most of the time was spent trying to get through the traffic of Peking. But we were successful, nevertheless. 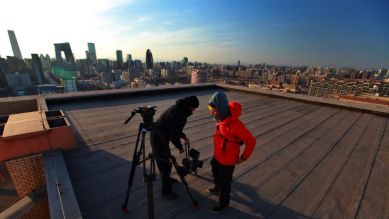 Our Chinese escort even managed for us to be able to shoot our long shots from the tops of the high rises, even though all high rises were closed off due to some political event. The police is very present in some special martial outfit, not to be overseen these days.
Now part 8 of our farEAST project is completed. Yes, I admit I sense a bit of melancholy. Who or what will I miss? China? The travelling? The two vans? Most certainly I will miss my - a nice old word for that - companions.

Now I will have dinner, Peking duck as a welcome. There, I will hand over the pen for the travel diary to the next author, Britta-Susann Lübke.

Dear diary readers, I hope that I haven't bored you all too much. I would love for you to also see the film later on. Until then I send heartfelt greetings, your Christian Klemke